1963 was a big year for 17 year-old Rita Pavone.  She started the year on the top of the Italian charts and finished it at the top of the German charts singing ‘Wenn ich ein Junge wär’ [If I were a boy] in the German language. She had been invited by RCA in Berlin to record an original composition written especially for her by Heinz Buchholz and Günter Loose a famous duo of German pop. It was clear to all that Rita was a little ‘butch’ in her manner of dressing and posturing herself before a microphone.  So Günter Loose came with the bright idea of writing a tune where she declares that it would be fantastic to have been born a boy instead of a girl. Half the song she praises the advantages of being a male, like going out at night without having to be back home early, or to be a famous center-forward in an international football team. Then, towards the end Rita changes her mind and admits that it’s much better to be a lovely female and be pampered by her boy-friend with kisses and caresses.

Well, that’s the story-line of ‘Wenn ich ein Junge wär’ which Rita recorded in Berlin on 4 October 1963.  By the 1st of  February 1964, it was Number One in Germany among Cliff Richard’s ‘Rotte Lippen soll man küssen’,  Trini Lopez’s ‘If I had a hammer’ and ‘America’, Conny Froboess’s ‘Drei Musketiere’, Connie Francis’s ‘Die Nacht ist meine’ and Manuela’s ‘Ich geh noch zu Schule’.  That was what the German Hit Parade looked like in late 1963 and early 1964.

As one can easily see, Germans liked to have foreign acts singing in the Teutonic language.  So they usually invited them to Berlin to record original material or covers of their own hits.  Peggy March had a # 2 in August 1965, with ‘Mit siebzehn hat man noch Träume’;  Elvis Presley had a # 2 in January 1961, with ‘Wooden heart’ [Muss I denn]; Paul Anka had a # 4 in July 1964, with 'Zwei Mädchen aus Germany’; even the Beatles had a # 5 with the double-sided hit ‘Komm, gib mir deine Hand’ / ‘Sie liebt dich’ in April 1964, while ‘I want to hold your hand’ [in English] was Number One.

‘EIN SONNY BOY UND EINE SIGNORINA’ – As Rita Pavone and Paul Anka both had had German-language hits in 1963-1964, RCA thought it would be a good idea to get them together to record a single where they would poke fun at each other for their shortcomings in the articulation of the German language. That happened on 30th October 1964 in the Lichterfelder Festsäle – Teldec Studio, in Berlin. It was produced by Sigrid Volkmann and famous band-leader Werner Müller conducting the RIAS Tanzeorchester with the Günter Kalmann Choir. Paul sings the higher part in the duet and Rita does the lower harmony. An American young man makes a date with an Italian signorina under the moonlight only to find out that the only words he knows in Italian are gelatto, macaroni and tutti-frutti.  She doesn’t understand English at all so there they are stuck with each other with no communication at all.  In the end they find their way around and come up with words like ‘my honey’, ‘sweetheart’ and ‘I love you’!  Such a winner!  It is a much better song than the A side but for some reason the rockier ‘Kiddy Kiddy kiss me’ was the one the got more air play and went up the charts.

‘OKAY! OKAY!’ [La partita di pallone] – As far as my German goes this is are very tread-of-the-mill lyrics.  Nothing really interesting. The only thing I’d like to point out is that even though Rita didn’t speak German she did a wonderful job memorizing the sound of the words she didn’t know the meaning of. Apparently the result was pretty good.  I was told she sings much better in German than she does in English.

‘WENN ICH EIN JUNGE WÄR’ – If I were a boy – As I have already mentioned it is the story of a girl who ponders the advantage of being a male instead of a female but is convinced in the end that being the target of her Tino’s sexual advances is much better.  Well, a point to Tino I guess.  This was Pavone’s greatest hit in Germany. Nina Hagen who lived in Eastern Germany then recorded a 'live' cover in the 1980's when she became famous in the West.

‘WENN DU DEINEN KLEINEN BRUDER SIEHST’ – When you see your little brother, tell him to stop ruining our dates. Tell him to stop pestering us! Tell him to leave us alone! Tell him to stop throwing pebbles at us while we’re necking. Tell him he’s too young but one day soon he’ll understand it.  That’s the ‘message’ of this little rocker. Rita recorded it in 26 September 1964 along with ‘Peppino’, ‘Blue Jeans’ and ‘Es ist aus’.  Actually that was her part in the album because ‘Okay’ and ‘Wenn ich ein Junge’ were already recorded in 1963.

‘MEIN JACK, DER IST ZWEI METER GROSS’ – My Jack is 6 feet tall – or 2 meters tall. The melody was borrowed from Johannes Strauss who wrote it in 1866. It was first recorded in January 1964 in the USA as ‘I’ll wait and I’ll wait’ [see ‘Small Wonder’] directed by Sammy Lowe and his orchestra. Rita recorded the German version in Berlin two weeks later. The German words are so much better: Rita being short – only 1.50 meters tall – something like 5 feet tall – fancies a guy called Jack who towers over her. Her ‘mission impossible’ is to impress Jack and she plans on dressing to kill to get his attention  wearing a pair of red shoes, a purple dress and green hat. Not only that but she’ll be a big star as well. I wish my German was better to tell you the end of the story.

‘ES IST AUS’ – That’s it!  No more hanky-panky!  You’re no damn good and I’m through with you!  That’s basically what this really good rocker says.

‘PEPPINO AUS TORINO’ –  As in ‘If I were a boy’ [Wenn ich ein Junge wäre’] ‘Peppino from Torino’ is a song especially written for Pavone. Günter Loose writes about this famous singer [Rita] who is very popular among her peers. Louis Armstrong would like to play his trumpet especially for her; Frank Sinatra rings her up daily from Hollywood; Charles Chaplin invites her for tea; Elvis Presley thinks the world of her; Maurice Chevalier thinks she’s got it ; Cassius Clay [later Mohammed Ali] tells her she’s the Greatest; even the Beatles like her so much they want her to become the 5th Beatle. There’s only one thing she can never get: Peppino from Torino eludes her in every way; Peppino really doesn’t care about her. An up-tempo tune reminiscent of rag-time in a superb brass arrangement of Werner Müller, is arguably Rita’s best German recording. It came out as a single in October 1964 backed with ‘Bye Bye Blue Jeans’, a most poignant ballad that unfortunately never made it into the album. that was obviously planned to be realeased in early January ’65.

‘KIDDY KIDDY KISS ME’ – Pavone and Anka sing a duet again. Paul carries the melody and Rita does the lower-harmony. It’s got a typical German-rock flavour while ‘Sonny Boy und Signorina’ is more like a County & Western German style. It was released in late ’64 getting to chart position # 7 in 20 February 1965. This tune has been covered by The Clevers, a Brazilian 5-member rock band that supported Rita Pavone in her 1964 Italian summer tour. It has also been covered by a South African act.

‘BYE BYE BLUE JEANS’ (TSCHAU LITTLE BOY) – even though this was not included in the Album that I have just reviewed I’d like to bend the rules to say that it is my favourite Pavone German song. It is so well constructed musically as well as lyrically! It is a little masterpiece of teen-age angst. Werner Müller’s arrangement is perfect. It starts really soft when the girl is saying goodbye to her childhood, it grows into a crescendo when she notices that she’ll have to face a new world, it has a dramatic key-change, it soars into the heights of a new-found maturity when she becomes a lady [Dame zu sein], only to go back to a really soft and sad [traurig] finale. What a tour-de-force! I suppose it didn’t make into the album because it is a ‘slow number’ as opposed to a ‘rocker’ – that was what was supposed to come from the likes of Rita Pavone and Paul Anka. It had a bit of air play in Brazil even if the record was never released here. It’s
one of those mysteries!


THE BRAZILIAN RADIO SCENE IN 1966

For a few months in the year of 1966 there was a radio manager [Helio Ribeiro] who tried to innovate programming and had Alberto Moraví, a Uruguayan disc-jockey who spoke only Spanish in the air of Radio Tupi of São Paulo. Moraví presented a daily one-hour show in the morning. He used to play all those latest records he received via-air-mail from Europe, US and Latin America. He played German records sung by the likes of Brenda Lee [‘Wiedersehn ist wunderschön’], Cliff Richard, Rita Pavone, Paul Anka. Cliff in Spanish [‘Maria Nomás’], Pavone in Spanish [‘Pido paz’, ‘Las papas con tomate’], Trini Lopez [‘San Francisco de Asis’], Herb Alperts [‘Whipped cream’ – Crema Batida].  The Rolling Stones in Italian [‘Con le mie lacrime’], the Kessler Twins in Italian [‘La notte è piccola’], Mina [‘Un anno d’amore’]. Then one day the Journalist Trade Union  had a meeting and decided that a foreign guy speaking a foreign language could not command the air waves one hour a day. And that’s all she wrote. Moraví was gone but his high-quality show stayed in the back of my mind forever. It was like opening the doors to the world. He spoke 80% Spanish and translated the titles of most of the songs into Spanish something that was really rare in our radio. When he really liked a certain song like Trini Lopez’s ‘We’ll sing in the sunshine’, he would play it many times and rave about it. I remember he playing ‘Bye Bye Blue Jeans’ and translating it into Spanish as ‘Adiós pantalones azules’. Very quaint and cute. 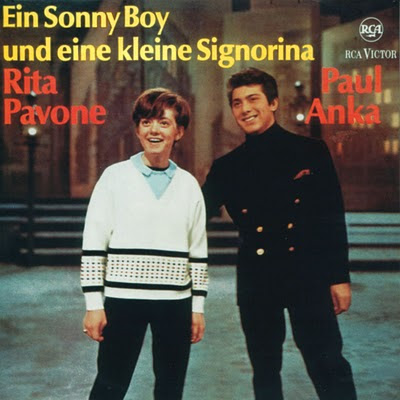